≡
Your shopping cart is empty.

The Die Hards - Out in the cold wearing just a Persil white vest..... A wee blog on winter salad Whilst salad is generally associated with the balmy days of summer (obviously not in the UK!) there are several salad plants which not only enjoy our winters but positively thrive on them. 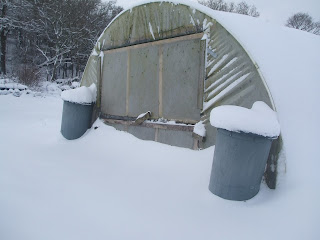 Poly in the snow.

They need no heat and will pretty happily grow outside in winter or in a cold greenhouse if you like to pamper them. Having said that I do live in the girly south so perhaps a cold greenhouse is preferable to outside under a fleece if you live north of Brizzle. Here at Maddocks Farm we manage to organically produce year round salads using unheated polytunnels, outdoor beds and a very large pile of fleece. Lettuce When it comes to lettuce sometimes the clue is in the name. Lettuce called Arctic King, Winter Density or Marvel of 4 Seasons generally do what they says on the tin. I have found, even in Devon, that there is little point having lettuce outside the tunnels in winter if you are an organic grower. Lettuce will survive under fleece but will be ravaged by every slug/snail out wearing thermals and won't thrive until April time when it will leap into action. In reality it is better to manure the bed over winter and then plant out new babies in late March under a couple of layers of fleece.  Ours went in outside under a double layer of fleece a couple of weeks back and apart from checking for slug damage they will be left undisturbed for a few weeks. In protected tunnels winter hardy lettuce produce a steady stream of leaves all winter. 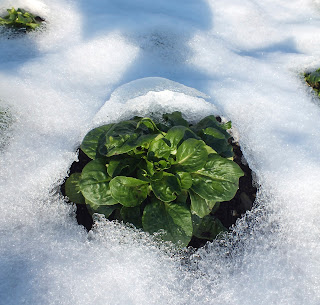 Corn Salad, Lambs Lettuce or Mache Whatever you like to call it it,  Lambs Lettuce is the Bruce Willis of winter "lettuce". On a negative side it has small leaves that for some reason seem to attract dirt like Spot the Dog and in my personal view has a slightly wooly texture in the mouth but on a positive note they has a fabulous fragrant spinachy flavour and will grow outside without cover from October through until March or April when the plants erupt into pretty white edible flowers and seed themselves everywhere. During winter you can use the cut and come again technique to get several crops of lovely fresh green. Perfect! 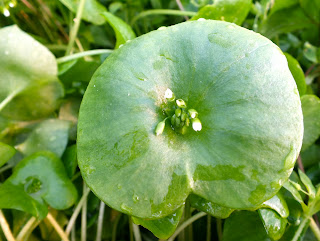 Winter Purslane is a favourite both with me and the slugs. Teardrop shaped leaves followed by lovely mild cucumber flavoured flowers. Crunchy, fresh and if it doesn't sound daft really "green" flavoured. A brilliant cut and come again.  Seeds itself prolifically to lie dormant all summer and pop up in the beds around late September to thrive through the winter. Doesn't get better than this. 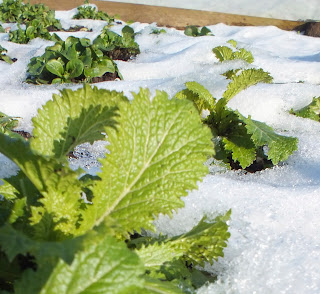 Green in the Snow with Lambs Lettuce behind

There are a lot of spicy leaves which do well over winter in an unheated polytunnel including Giant Red Mustard, Golden Streak and Wild Rocket but outside three will thrive down here. The most prolific of them all is Green in the Snow (see - back to does what it says on the tin!). It is also a bit of a dirt magnet but even in the harshest conditions thaws out a treat during the day and sends up lovely little spears of spicy perfection which are hot enough to rival horseradish and which will just keep on going all winter. Here photographed a few weeks back with Lambs Lettuce behind. Come April it will be covered in lovely edible yellow flowers (beloved by the bees) and then self seed. Salad rocket will also seed itself well to suddenly make an appearance in February with tiny seedlings that don't look strong enough to cope with the cold but which hunker down to produce prolific leafy loveliness in April. The last to cope will outside with a fleece tunnel is American Land Cress which can get a bit robust and tough but cut back hard will produce lovely cress flavoured leaves for weeks over winter and early spring. 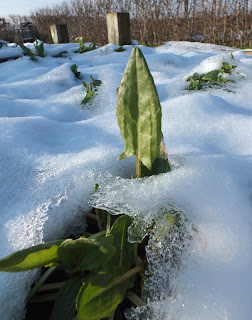 Herbs As well as the winter purslane mentioned above, four herbs struggle on in a manly fashion over the british winter. Well, it would be more honest to say that they give up partying last in winter and are then first up for coffee in the morning.  The hardiest of them all is the sorrel which starts pearcing the snow with arrow head of tangy freshness as early as the beginning of February and if picked hard will continue to produce sharp lemon blades until a Spring sowing comes to the rescue. Chives are another herb that heralds the start of Spring and bring a lovely oniony tang to early salad. Flat leaf parsley also keeps going over winter producing a few leaves here and then and then suddenly leaps into action with frilly freshness at the beginning of March. Coriander is surprisingly hardy and will sulk in a bed over winter to suddenly flush into new growth in late February. Chervil won't do so well outside but will happily grow in an unheated bed in a poly tunnel and bring a sophisticated hit of frondy aniseed to any winter salad. 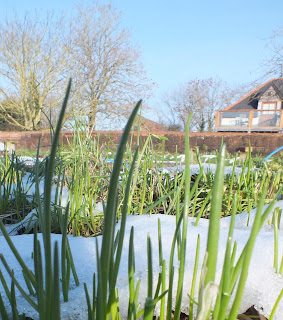 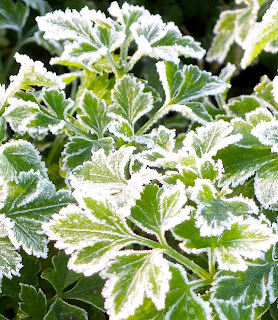 Flat leaf parsley in the frost 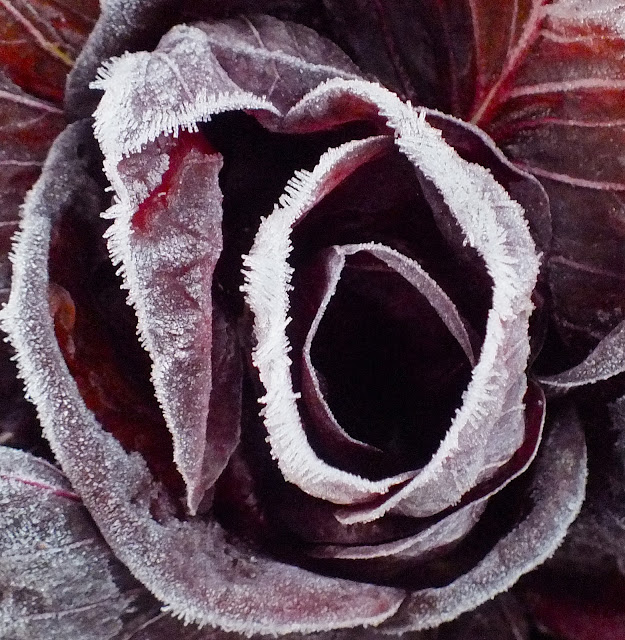 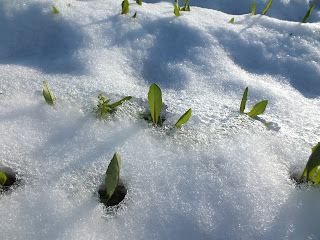 There are two additions which add a bit of winter colour to the bowl. One is red ribbed dandelion which brings some bitter endive taste and the other is radicchio. If you leave the stumps of your autumn crop in the ground then you are rewarded with perfect rosettes of regrowth around the base in early spring which will cope with any amount of cold but rot if they get too wet. Be warned they also act as slug hotels over winter to check them carefully. 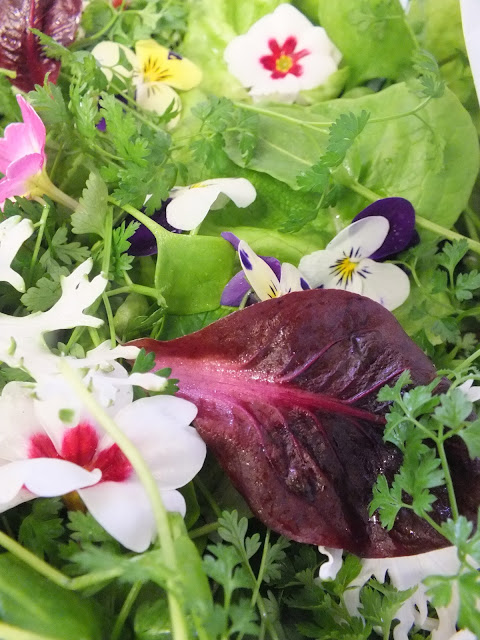 Others that you can add to the pick & mix are swiss chard, winter spinach and baby kale leaves as well as wild garlic in early Spring. This Mothers' day salad is also decorated with the earliest of the edible flowers violas and primulas.